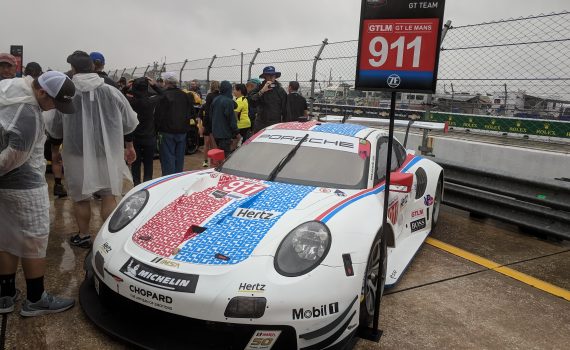 The 2019 Sebring 12 Hour race weekend was very special.  It was named Super Sebring with the addition of the World Endurance Championship (WEC) 1000 miles endurance race on Friday to the famed 12 Hours of Sebring on Saturday, with IMSA celebrating its 50th year as professional sports cars premier sanctioning body. The Porsche factory team took top honors in the IMSA WeatherTech GTLM class (Porsche GT Team #911), in the FIA WEC GTE PRO class (Porsche GT Team #91) and with the Patrick Dempsey Racing privateer WEC GTE AM #77.  Both factory Porsche teams won with late race passes that were decisive.  Below you will find a link to a small portion of the 600+ pictures and movies I took on my Canon camera and Pixel XL phone.

We arrived at the 2019 Super Sebring weekend on Thursday with all WeatherTech classes practicing on track.  Next up was the WEC practice session and wandering through both series pits during the Prototype Challenge spec series race.  A WeatherTech evening practice followed at sundown (7:45pm).  Then WEC qualified from 9:30pm to 10:30pm that evening.  The WEC classes would race on Friday from 4pm to 12 midnight, or 1000 miles.  A long and fun day for any sports car fan.

Friday was another beautiful day with WeatherTech class qualifications beginning at 9:55am.  After, I attended the autograph sessions and spent my time there with the visiting WEC teams.  You will see the LMP class-winning #8 Gazoo Toyota racing team with Fernando Alonso and the GTE PRO Porsche teams for car #91 (class winner) and #92 and the winning GTE AM Dempsey team.  This was followed by the WEC grid walk prior to the WEC race. The WEC grid and pit area were located inside the long Sebring back straight, entering off of turn 16.  This was quite unique and required some serious braking during the race, into a 110-degree pit-in entrance left turn.

The WEC race was fantastic with the 36 or so entries providing extremely long stretches of green flag running in excellent racing conditions. There were 2 cautions in the first 6 hours that meant the race would not reach 1000 miles, so it became a timed 8-hour race.  An interesting note, when WEC has a ‘yellow flag’ it is basically a virtual safety car, which means every team must slow immediately to 80km/hour and proceed at that speed until the track goes green.   It’s almost like watching slow-motion racing and you will find a 41 second video to confound you and prove it.  Rain, hard rain, came in the last 20 minutes of the race with the winning LMP #8 Toyota taking an off-course excursion, among others.  The crucial move for the Porsche GTE PRO Team #91 (with Gimmi Bruni driving) came with 17 minutes left as they followed the BWM Team #81 into the pits, nose to tail, for rain tires, with the Porsche GT Team beating them out for the GTE PRO lead.  Porsche held that lead as the race was put under the safety car for the final 12 minutes remaining of the 8-hour timed race.  Another fantastic pair of wins for Porsche (GTE PRO and GTE AM) at Sebring.  The popular Jackie Chan DC racing team #37 won the LMP2 class.

Check out the WEC race highlights at https://www.youtube.com/watch?v=2P0PKa45t_E to get a feel for the excitement that WEC brought to Sebring this year.

Saturday’s 12 Hour Race day began drizzly and rainy. The usually packed grid walk was a bit subdued due to the weather. The race started under yellow as the teams came to grip with the wet track. Overall, it was another outstanding race with much drama.  For Porsche fans it was thrilling to watch the Porsche GT Teams led by Nick Tandy (who had qualified 8th in class in Porsche GTLM #911) work their way forward after being a lap down in the first hour, to take the fight to the entire GTLM class and for Nick to take the lead from Ryan Briscoe in the #67 Ford GT in the final hour and hold it to the checkered flag.  Given the weather, I was content to dash between the PCA tent and our Gurney Terrace seat (with live video feed), so there are not any pictures taken from around the track during the race on Saturday.  Regardless, you can check out the 12 Hour race highlights at https://www.youtube.com/watch?v=AC1x0Y1FTec to get a feel for the on-track excitement around all of Sebring’s 17 turns.

Among the photos, you will see the PCA Porscheplatz Car Corral and hospitality area off Turn 17.  A typically great turnout there.  It was great seeing folks from SPC and the other regions.  It was a very popular place early in the race before the rain subsided a bit, and actually throughout the race.  Porsche also had a high-priced hospitality area in the elevated terrace area above the front stretch pits at the Turn 17 end of the Club Sebring building.  My friends and I had Gurney Terrace tickets and many of my pictures and videos were taken from there.  Gurney terrace is located near Turn 1, at the opposite end from Porsche Corporate hospitality.  Thus, I was able to wander down to the opposite end of the terrace and see how the well connected Porsche customers were enjoying the race.  Not too shabby a setup for sure!  You will also see a couple of pictures of the driver introductions on Saturday where every driver pretty much had to leave their umbrella behind and face the falling rain to be introduced to the crowd.

On Friday evening IMSA Radio kept everyone abreast of the pending space coast rocket launch from KSC, which we could actually see from the track. There is a short 25 second video of the rocket rising upward between turns 1 and 2 over the Sebring front straight walkover bridge.

All in all, it was an action-packed international sports car racing fans dream weekend.  Counting the support races we took in 24 hours of exceptional racing, watching the greatest sport car drivers in the world duel in two fantastic endurance races.  Some drivers actually participated in both the WEC 1000 Miles and the 12 Hours of Sebring.   I hear they are talking of doing it again next year.   Super Sebring 2020 indeed!

Join now. It's the best!

Join PCA now. It's the best!